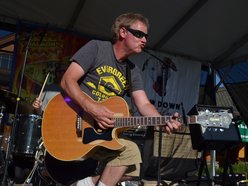 Joe Bye’s infectious style of high-energy acoustic rock has made him a local favorite with a diverse fan base. Every show is different depending on which “Friends” Joe brings along.

Joe Bye has been a staple of the Colorado music scene for decades. He has received airplay on KBCO, KTCL, and KGNU, and was a featured artist performing several times live on KBCO Studio C Local Edition, KTCL MusicLink and the KGNU Kabaret. Bye has performed at venues and events both locally and nationally including CBGB’s Gallery, Cafe Sine and Cafe A-Go Go (New York City), Daytona Beach Bike Week, The Little Bear, (Evergreen, CO) and Herman’s Hideaway (Denver, CO).

From 1997 thru 2007 Joe Bye owned and operated the Buck Snort Saloon, in Sphinx Park, CO, and as the featured performer there, his shows are now legendary.

Once named “the hardest working man in local show business” by G. Brown of the Denver Post, Bye received recognition as the opening act for such notables as Kris Kristofferson, Warren Zevon, Steve Forbert Jim Messina, DeVotchKa, Steppenwolf, The Guess Who, and Little River Band, among others.